MediaPost is carrying an article about a study done by a mobile ad network called Quattro Wireless, which looks at click-through rates on online advertisements via mobile devices. 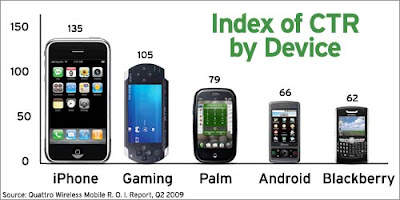 The article itself also mentions that the total number of ad impressions were the highest for the iPhone and iPod Touch.

So basically, iBlahWhatever users are more likely to click on ads, or in other words, fall for marketer-bait. QED - these folks are gullible and like to splurge on shiny thingummies. As, it would appear, are gamers, but that was never in question :-)
... 08:18 3 comments:

(My review of Cafe Thulp in Koramangala, which I put up on Burrp! Bangalore, slightly edited)

While I'm not quite the burger connoisseur, I certainly know my meats and breads, and Cafe Thulp is pretty awesome in this respect.

I called up and asked for directions to the place, which turned out to be a good idea, as the placement on the map here wasn't entirely accurate, and had my expectations raised by the courteous and cheerful way in which the chap directed me.

On reaching, both me and the significant other were impressed with the decor of the place - bright, and stacked with board games and books near the entrance!

The place-mats on the table had some funnies on them, and the menu was a delight to read (funky names for the items, and a couple of margin scribbles), which made us delay our order by quite a bit! We finally settled on a hummus with pita bread, a chicken sub (The Funky Chicken) and a vegetarian spaghetti (don't remember the name.. Alphonse something?), a lime-mint cooler (Sour Puss) and the apple/cinnamon smoothie. We also packed a grill-cheese sandwich (PETA ka Beta) and a burger (Moo with Cheese) for a friend.

While the food was outstanding, the Sour Puss really only felt like watered down Limca with a few pudina leaves and a lemon slice floating around (our standards for lime-mint coolers are sky-high - we hit the Fruit Shop on Greams Road in Chennai pretty often!). Also, the smoothie/milkshake felt slightly meh - probably not enough ice-cream, too much milk? I dunno.. But this wasn't too sore a point - I plan to come back later and try out the other shakes (including the Snickers Blizzard, which sounds yum..)

Summing up: both of us loved it, and the friend who we parceled the food for also loved it. Hence, while I haven't eaten at too many burger joints in Bangalore just yet, for now, this is the best of them all!

Steven Levitt and Stephen Dubner gave me a good couple of hours, when I read Freakonomics. "Exploring the hidden side of everything" was (to me, at least) a novel concept, which was why I also gobbled up The Undercover Economist by Tim Hartford.

These days, though, when the advantage of information (and data!) asymmetry is being gradually eroded by the likes of the Big G, 'counter-intuitive' pronouncements require a phenomenal amount of legwork, and nobody can get away with being contrarian just for the sake it, thanks to the meddling bloggers.

Hence, after Levitt and Dubner get called out again and again, and continue to not "take responsibility for their failed attempt to be cleverly contrarian", I was reminded of a Seth Godin conclusion from about a month back:

You don't have to like the coming era of hyper-measurement, but that doesn't mean it's not here.

Wow. Quite possibly, the most enlightening 21 minutes of my life. Watch it. Ideas worth spreading indeed.
... 14:21 No comments: