The actions of a government reveals its proclivities.

So, for instance, when Nandigram chaps are fired at, you know the West Bengal government means business. When a state government concerns itself with regulating attire at cricket matches, you know where its priorities lie.

But what happens when government entities show an rather disturbing tendency to make decisions that tend towards the pelvic region?

In early-to-mid 2007, the Beeb asked its users to come up with their own attempts at designing a logo for the 2012 Olympics. And ended up selecting as one of its 12 best attempts, a most sneaky, yet hilarious design. 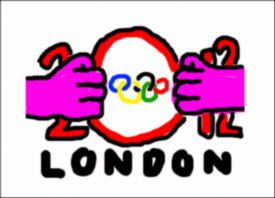 And now, the UK's Office of Government Commerce finalized this logo, in their re-branding efforts.

which, on a simple 90-degree clockwise rotation, becomes this:

Hmm... does this mean the UK's relations with The Netherlands and the Down-Under nations will see an upswing? Only time will tell.

In the meanwhile, some ponderables remain - what conclusion can be drawn from this? Is all this intentional, an honest mistake, or a damning psychological indictment of the government's true tendencies?
... 18:01 1 comment: