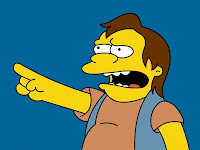 Update: As bolsters, a couple of earlier articles, one again by Peter Roebuck, and one by Lawrence Booth.
... 17:49

And I do hope someone links this post on their blog and adds that there have been some very nice comments following it :D

In part due to my own laziness to string together a coherent argument, in part due to my rush to catch up with dinner at my hotel here in Pune, and in part due to your kind linking to a long-lost blog, i shall just link a blog-post here from the very same blog. I believe T20 is a natural extension of the sentiments expressed here.
http://freewheelingaway.blogspot.com/2006/03/piyo-thanda-jiyo-cricket.html
This is, of course, not to cast doubts on the resounding success of the format which was never in doubt, IMO. After all, for every Salman Rushdie, there's a faster-selling Jeffrey Archer, for every 'English, August', there's a more popular '5.someone'...